"65 Years of EOKA Liberation Struggle"
This year marks the 65th anniversary of 1st of April 1955, the day the EOKA struggle began. A milestone for Cyprus history, because it proved the mental strength of Cypriot Hellenism and its strong faith in the demand for Enosis (Union) with Greece. A milestone in world history, because it has demonstrated the power of the desire for freedom that has pervaded the darkness of colonialism. The peaceful young people of Cyprus turned into excellent and resourceful freedom fighters, the pupils turned into a rushing volcano and the women turned into mental strength beacons. The participation of the whole Hellenism of Cyprus is the component that made the Struggle great, aroused the admiration of all free men and women around the world and forced Great Britain to withdraw, resulting in the creation of the Republic of Cyprus.

"25 Years of Melathron Agoniston EOKA"
In 1995, the Melathron Agoniston EOKA started its operation based on an idea and vision of the surviving fighters of EOKA 1955-1959. With the motto "Our debt to those who died, our debt to those who live", they all worked hard with sympathy and mutual support and achieved this sacred goal with the full support of the State, the Church and organized bodies and organizations.
The Melathron first opened its doors for the Fighters of our Liberation Struggle and then for the fighters of all the modern struggles of Cyprus. In our days, it serves everybody who needs it.
The Melathron has been operating since the establishment of the "Home for the Elderly", while it can be proud of its "Rehabilitation Centre" specializing in the rehabilitation of the nervous, musculoskeletal and vascular systems, as well as in other diseases.

"OEB’s 60th anniversary"
Founded in 1960, the Employers and Industrialists Federation (OEB) is the most representative, politically and economically independent employer’s organization in the country. The history of OEB is synonymous with the evolution of modern Cypriot business and through its actions it is a decisive body for social and economic development. The members of the Organization, which includes 65 Professional Associations, come from all sectors of economic activity, cover more than 75% of the GDP and employ over 60% of the country's workforce. It is a recognized social partner and being the voice of the business community, it represents Cyprus in the International Organization of Employers and BusinessEurope, the pan-European employer’s organization. Her vision is to be the leading representative of the employers and business world and to act as a catalyst for the social and economic development and prosperity of the country. 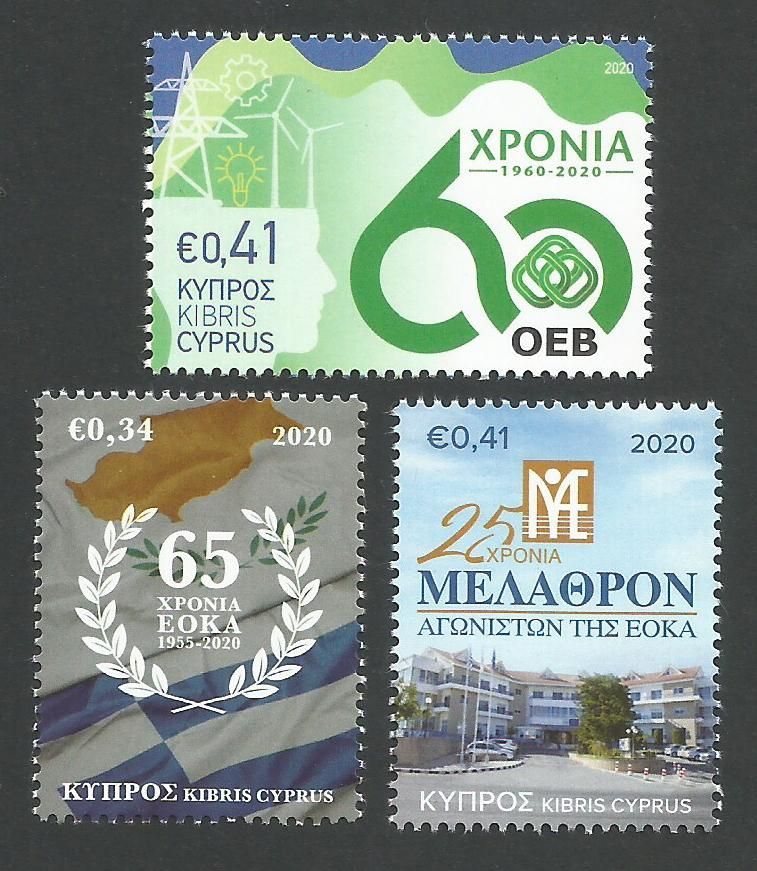 Also the "EUROMED Postal" issue a stamp with a common theme. This year's theme is "Traditional Gastronomy".

EUROMED 2020 "Traditional Gastronomy" in the Mediterranean
For the seventh consecutive year, Member States of the Postal Union for the Mediterranean "Euromed Postal" issue a stamp with a common theme. This year's theme is "Traditional Gastronomy".
The stamp of Cyprus illustrates kolokasi, a purely traditional Cypriot food cooked in various ways.
With its characteristic conical shape and special taste, kolokasi is identified with the Cypriot Gastronomy and the whole culture of the island.
It has a high nutritional value and significantly shields the immune system. Kolokasi is rich in vitamins A and C, proteins, carbohydrates and contains fibres as well as amino acids. 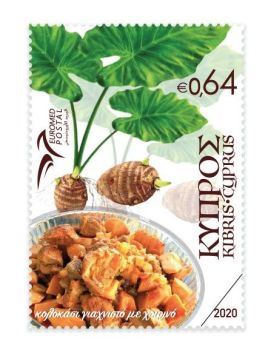